After following around our lovely tour guide through the massive warehouse we headed back to reception to be picked up by the next person. This next tour took us to the printers. CUP is one of the only major publishers in the UK that still has its own printing press. I think that's pretty cool, but they are trying to get rid off it since it is very expensive compared to outsourcing. But the printer is still around so we were able to have a look.
The first thing we learned was that they are still a bit old fashioned. No digital printing, its all done by lithography. That means (as I gathered it) that the pages to be printed are engraved onto a metal plate that is covered with blue paint. The areas that don't need to take on ink are carved away until you are left with a blue print. If you print black and white, then you only need this one plate. But if you print in colour you will need four: one for each color (usually cyan, magenta and yellow) and one for black. 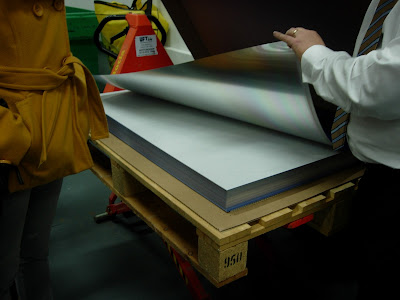 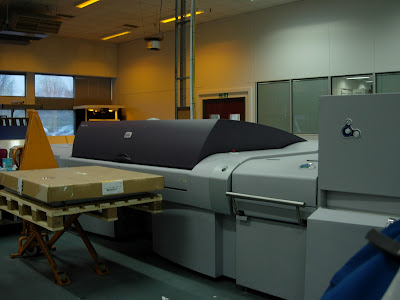 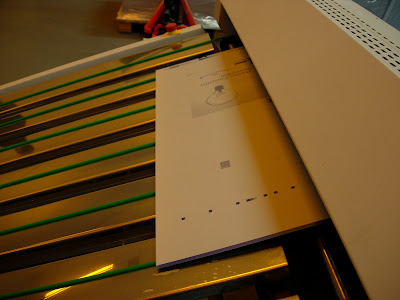 Photos are taken off those plates and stored away. The plates are then inserted into massive printers and the paper runs through each of the plates and out comes the printed page. The biggest printer they had took ten plates, one for each side of the paper, so you had greater variety on colours. 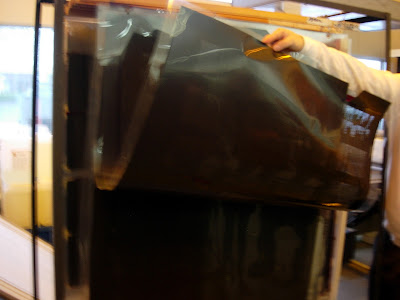 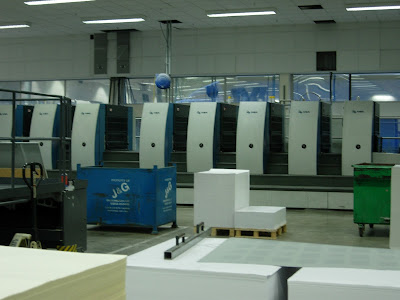 Each sheet that is printed consists of a number of pages. Usually in multiples of 8, so 8, 16, etc. The largest they could print was 64. They don't print from a big roll of paper. Instead they have piles of sheets. After the sheets are printed they get folded by a machine, and then put by hand into another machine. That one I thought was really clever. All of those folded sheets are numbered in the order they have to be in. Then they get loaded in a row into different trays. They fall on after another onto a conveyor belt underneath which moves exactly one position by the time the next one falls, so they get stacked neatly into piles. 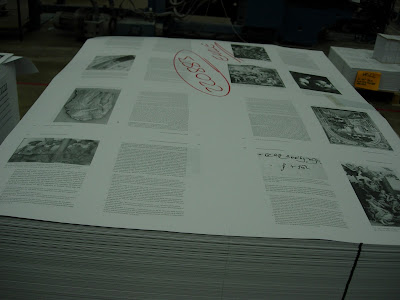 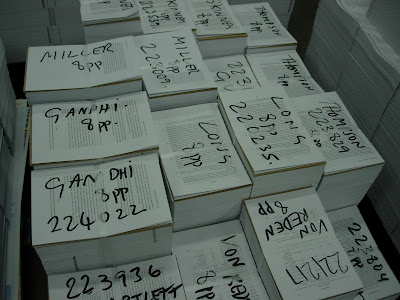 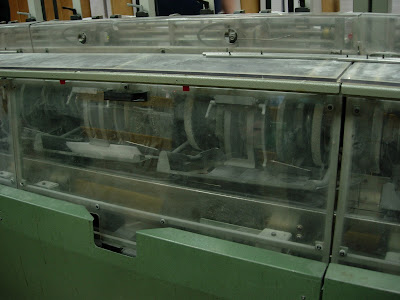 When they come out of this machine they go into the next that will put tons of hot glue to their backs and stick on the binding. At least for paperbacks. Unfortunately, we didn't see any hardbacks being made. The spine is still really warm when they come out. Because they are so warm and easy to bend they cool off and get pressed together so they will be nice and straight once dry. 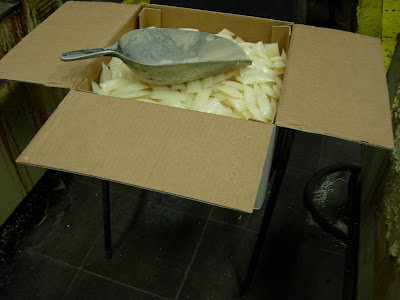 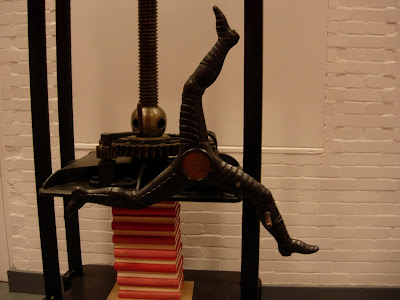 The next step is cutting of the excess paper and getting it into the right format. This is yet another machine that will cut the book into the right dimension. They get quality checked along the way and this is no exception. Guys will pull out copies and measure them, check for color inconsistencies, etc. It's all really thorough.
We didn't see where they were packaged since that was yet in another building. But we did notice stacks of paper all over the place and weird things hanging from the ceiling spraying out gases. Apparently when paper gets delivered it first needs to acclimatise before it can be printed. Otherwise, like wood, it will change its dimensions. And the weird things are humidifiers making sure that the air temperature and humidity stays the same at all times. It's not very humid at all in the place but standing right under the humidifier makes you feel a little bit like being in a jungle. 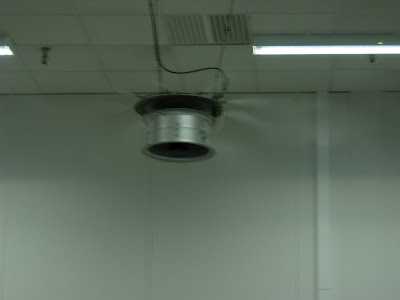 To round everything off we were shooed into a meeting room and the editorial team for ELT gave us a nice presentation on what they are doing. Sorry, no pictures here. Of course they made it sound like a great place to work. But I loved how they told us about their own stories and what they did after uni and how they ended up there. Most of them went travelling and did some English teaching in Asia or Eastern Europe. And of course when we left we were send off with some nice goodie bags. A CUP linen bag filled with highlighters, post-its and CUP pens.
I had great fun at CUP. As you might be able to tell from the photos. I took close to 90 pictures. Was going a bit nuts, but it was just all so cool. For the next outing I will try not to bore you with all the boring details.
Posted by Judith at 08:26 0 comments

I had my first 'field trip' on Monday. Most of our class went to Cambridge to see the university press. It was a miserable day, rain and wind and freezing temperatures. We had great fun anyway. Thankfully we spend most of our time indoors.
The day started with a little introduction to CUP. Apparently it is the oldest and most respected press in the world (according to their promotion video). Then we split into two groups. My group headed over to the warehouse (through the rain) and had a tour. I've never been to a warehouse. They had a big storage area where they can have up to 6 million books! It's massive. The big numbers you see kept counting up to T if I remember correctly. 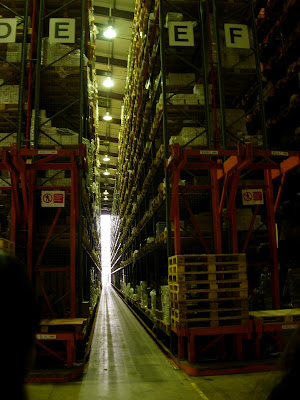 So that's where the books are stored. For delivery they are put into another part of the warehouse, I think it was called the front pick. That's basically another big area, but this time with shelves only as tall as a person stands. The pickers go through that with little wagons were they have up to 12 packages on and a computer tells them with route to take and which book to pick up and even in which package it goes! Very cool. 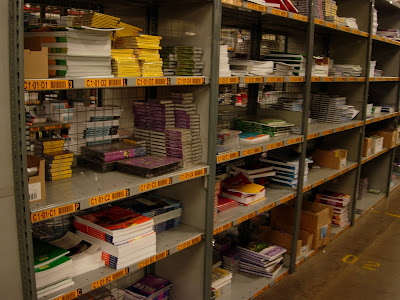 Again, tons of books around. Wanted to steal them all! 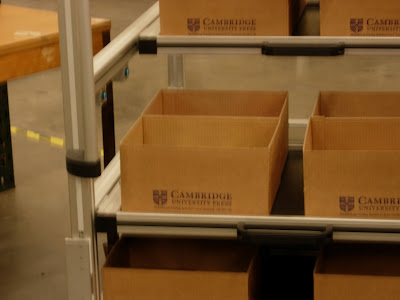 There is a blue light above each package. It will light up to show the picker where to pack a book. 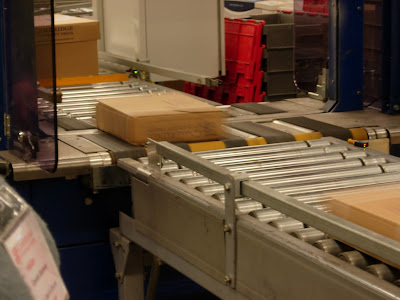 This is the machine that puts the bands around it. You really don't wanna get your fingers in there. That thing is a beast! 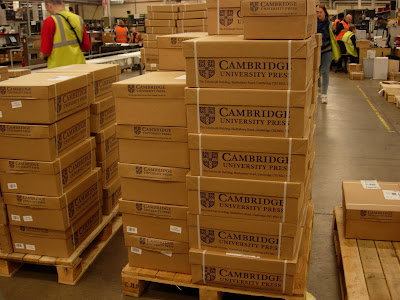 Ready to ship out!
I didn't get a good picture of the delivery of new stock to the warehouse. Every new book that comes in is weighted and measured and put onto a database. From that the computer decides where it would be best to store. I thought there would be fancy machines for that. But no, just a guy taking out every book, putting it on an old kitchen scale, and then measuring it with a little measuring tape. Pretty old fashioned.
Posted by Judith at 08:05 0 comments