It's a hot weekend in London. Not really in the mood for anything. Just hanging out in my underwear surfing the net, watching the football and F1 and catching up on anime.
Went to the hairdresser and got my hair chopped off. She was really hesitant and I had to tell her about five times to take it off. It's still not as short as I wanted it but at least it feels a lot cooler in the heat now. Maybe I'll go again in the next couple of months to get it even shorter. For some reason hairdresser never wanna cut my hair short, but leave it long instead. Don't really know why. So much more convenient when it's short.
Already downed a couple of beers. Trying to stay cool though and drinking some tea. Hot drinks cool me down. Don't know why. I figured I'll post a few pictures from the wedding. Don't really feel like commenting on it. So please, just enjoy the pictures and then go out and enjoy the summer. It's beautiful over here at the moment! I enjoyed it this morning with a long walk when it was still cool. 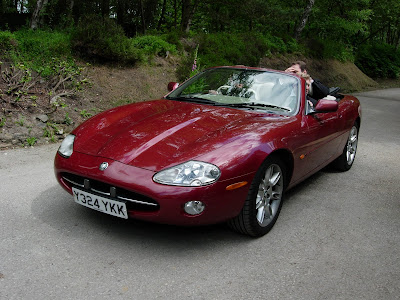 Groom taking off for church. 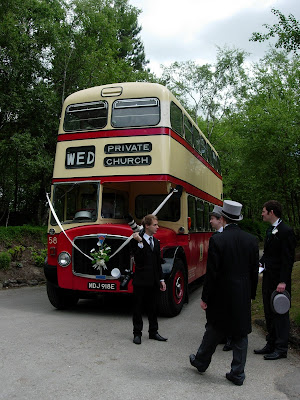 And this is our ride. Notice the best men and ushers in morning suits! 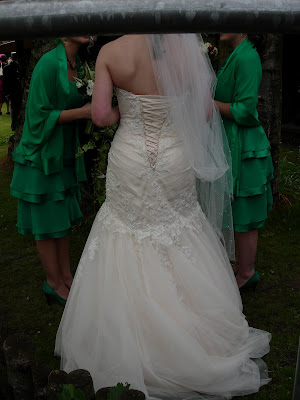 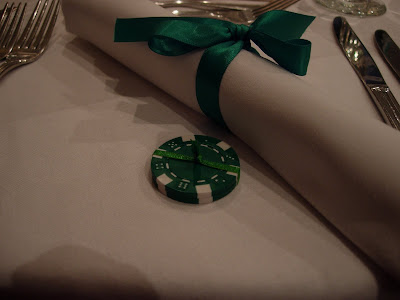 Theme was green again. These chips got me two glasses of champagne. Nice.
Posted by Judith at 16:45 1 comments

Haven't blogged in awhile and feel bad about it. I still read tons of blogs and enjoy it greatly. I have plans to go through my bloglovin account and dust it out a bit. There is just too much there to read. When we went away over the weekend I had over 200 posts to catch up to. Yikes.
Today's post is just about getting back into the whole blogging thing again. So let me tell you about my day. It appeared to be a regular Thursday work day. But then girl who I don't really like took a spontaneous half day off. Nice. On lunch break I headed over to HMV and found that Gilmore Girls is back in print (or whatever the equivalent for DVDs is) and I finally got the fifth season. YAY! Still missing the seventh, but I am sure that will be back soon. And I got it for only £13! What a bargain. Very happy. I noticed some other shows that I still want to pick up, most notably Californication (but at £20 a season still too expensive) and Babylon 5. The last one I might pick up tomorrow just because I would really like to see it. Well, after successfully getting my GG geek on I headed over to Game and pre-ordered Star Craft II for bf as a birthday present. It comes out a week too late, but I figured he won't mind. He'll be busy on a project anyway and can't start to play it properly until he gets his new Macbook. Which probably won't be till August. So haha.
Back at work we started following the soccer games. No offence, but gosh were we all smiley and happy the closer we got to Italy being kicked out of the world cup. That was just too sweet. At the same time the longest tennis match in history ended. Thought that was hilarious. Those poor guys, felt really bad for the loser. Must be hard to lose after three days or however long it was. Great match anyway.
It's really hot over here at the moment. About 30 degrees and really humid. Clouds are drifting over us but it doesn't wanna rain yet. Windows are wide open to catch a little bit of a breeze. Not really happening so far. Though I did enjoy cool shower after work and there is a cold beer waiting for me in the fridge. Basically sitting here in my underwear sweating away. I enjoy this on a very basic level. Since I still remember the cold, long winter I am glad it's nice and sunny now. Tomorrow will probably end with sitting in Regent's Park sipping some cider. Ah, living the life. Almost forgot about the cheese cake. At work some buyers were tasting cheese cake and other sweets from all the different supermarkets over here and once they were done we got to eat it. I love cheese cake. Needless to say, supermarket cheese cake is not the best in the world. But it was free and it was yummy. Not saying no to that. I am just a tiny bit stuffed now so dinner basically fell flat. Though I picked up some instant noodles. Didn't have those in awhile and really crave them. But have to wait till it cools down to eat those. The beer will carry me over till then. Must be all those ramen blogs I read that make me hungry for noodle soup. Sigh.
Otherwise an uneventful day. The weekend will hopefully be just as uneventful. Supposed to be hot. So we will be hiding in the apartment and possibly watch some games on TV. Germany is going to play England which will be brilliant. Don't really care who wins, but it's fun to watch anyway. Japan is on in a little bit. You have to beat Denmark! Please! Go Japan, huhuh!
I'll stop rambling now and will hunt down the beer in the fridge. Manchester brown ale. Doesn't that sound delicious!?!?
Posted by Judith at 19:23 0 comments

Sorry everyone for not posting for what seems like forever. Last weekend I finished my 'year of weddings' with the final one up in Yorkshire. It was a blast, but this is not what today's blogpost is about. I will come back to it later though promise. Once I have uploaded all the pictures it will be more interesting anyway.
Today I wanted to let you know what's happening with my secret project. As some of you might have read a couple of months back I was getting excited about starting something new. As of today I have informed my current employer of me leaving at the end of July. That is not the exciting news though. The reason for my departure is that I will go back to uni in September. I got accepted to a master of arts in publishing. It's a year long program running full-time. I am very excited about joining. I have wanted to work in the publishing industry for awhile now, but never managed to get my foot in the door. With this course I am hoping to get some experience and knowledge into me in order to be able to score a job in the industry next summer after I write my thesis (yeah, not too thrilled about that. Just did one three years ago, wasn't that enough!?!?).
Yeah, so this was just to let everyone now that it is official now. I am leaving my job at the end of July and beginning a new chapter in September. Now isn't that exciting!!!