Half way through second placement

Apologies in advance. I will be talking about a placement again. Sad but true, not much else going on in my life right now. So if you are really not interested in what I'm doing at a publisher, feel free to skip this post completely.
For everyone else, this last week I was at an academic publisher out in Basingstoke. When I accepted the placement I looked at a map and figured it wouldn't be that much further than Wimbledon (where I used to work). Took me just over an hour to get to Wimbledon, so clearly going to Basingstoke should be 1 1/2 hours tops. WRONG! Takes just over two hours door to door. Four hours commute every day. I'm beat. Stayed in bed till after 12 today. I felt so tired and just couldn't face the day. But that's all the negative there is to say about this placement!
Now to the positive. Everyone is very welcoming and wanted me to get a real experience of what it's like to work for them. My main contact Steve was very kind and showed me around the office and made introductions. He had read my CV and I mentioned that I would like to see production and rights. So he put me into production the first week and next week I will see rights. He also said that I will be working on real projects and not be used as a 'labourer'. More sweet!
So I wandered off to production to work with Matt, their main electronics guy. I basically helped out on the ebook front, which was really interesting. Got a list with 1000 backlist titles that they want to convert to ebooks and then I was let loose onto their system to chase down old pdf or any other file I could find. Matt had kindly already collected the most recent ones (200) and I found about 600 more. So we were only missing 200 at the end. He told me that those now had to be ordered up in hardcopy, scanned and then converted into PDFs. Was really relieved when I found out that I wasn't going to be the one who is going to scan them. Phew. The next task was to update their database. Basically I went through their most recent titles and added on their database lines and tickboxes that would enable them to check whether ebook files had been ordered and received. All of this doesn't sound really exciting. But I thought it was pretty cool. Plus Matt explained everything nicely and I got to ask a million gazillion questions. He was also so kind to be my interviewee for my thesis plan that I have to write up sometime soon. The last day I spend on the office ipad checking if some of their earlier titles looked ok on the ibook. Overall an amazing week. It thankfully also showed me that there is not only one publisher I could work at and have fun at, but there are plenty!
Next week I will be in rights. Not sure what I will be doing, but I was already told that they have a project for me. So it should be fun. But I'm glad it is only two weeks as the commute is horrible. I got to talk to one of the production girls who seems to be in charge of new hires. She was very excited that I want to work in production and was already starting to plan ahead on how I could fit in. That was really lovely, but I told her that I want to work in London. Darn. That might otherwise have been a brilliant opportunity to cheat myself into a job. Well, at least I'll have a good reference.
This weekend I will be working on an assignment for uni. Urgh. Hate working and studying. Really wanna get it all done and over with and go back to full-time work (never thought I would say that!). Uni is all nice, but I love those days when I can just come home from work and don't have to study or read.
Ok, back to my sales assignment. Need to manipulate figures on excel...
Posted by Judith at 15:02 2 comments

I finished my last week at Simon and Schuster on Friday. To be honest I did not want to leave. I wanted them to scream 'Don't go, we'll hire you!'. Of course that didn't happen. Not that the people I worked with wouldn't want to do it. But I guess they don't really have any say in who gets hired anyway.
But I left in good spirits. Everyone had something nice and encouraging to say. I left my email with a few people who promised to contact me if something came up, added Facebook friends and now follow people on twitter. So who knows what the future holds.
I'm going to start my next placement on Monday with MacMillan Publishing Solutions. That will be a whole other beast to conquer. Not too excited about the trips to Basingstoke (though it does give me lots of reading time), but I hope the experience is worth it. I guess this also means I will have to update my CV. But let's leave that till later.
I will leave you with a photo of all the manga I was given this week. I quietly enquired whether I could take a few. Sarah (who's in charge of everything to do with manga) got really excited about that, because let's face it no one had ever asked before, and started piling them up. Giving me tips which ones were good and fun. She herself does not read any, but she knows anyway for her job. After plenty of laughter, that I successfully kept quiet about my love for manga, it was decided that I should get more and was given the back catalogue to order all the ones I wanted to read. I tried to not get over-excited and limited myself to ten. They will be sent to my house. Score! 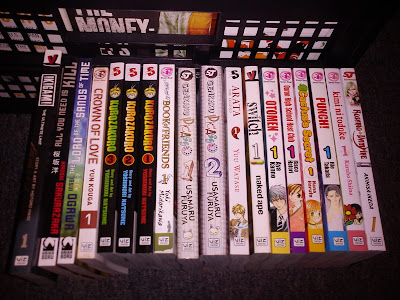 Earthquake, tsunami and now a volcano eruption. Japan just doesn't seem to be able to catch a break.
I don't think I need to repeat any of the news or pictures here. I know I don't know anyone in Japan nor have I ever set foot on any of its islands. But nonetheless all the pictures reaching us make me sick. Feel so bad for all the people affected in any way by this disaster.
I cannot seem to get myself away from the computer and keep updating my feeds. I know that's bad, but just can't help it. My bf thinks I am nuts. He mentioned that surely now I would postpone any plans I had to go visit soon. But now I want to visit even more. Crazy, no? Makes me wanna book a flight right now.
Thinking of everyone over in Japan. Be safe.
Posted by Judith at 16:36 2 comments