A couple of weeks ago the bf and I went for afternoon tea. I love afternoon tea! I think it's one of the greatest inventions. So relaxing and so yummy. I had looked up this little place in Soho, Soho's Secret Tea Room. Little did I know that it was actually secret. Well, at least hard to find. It is situated on top of a pub and there is only a tiny sign pointing you towards it. You have to enter through the pub and then you have to ask staff to be escorted up to the tea rooms through the staff room behind the bar. Feels very James Bondish. We made the mistake of not reserving. But luckily were early enough so they could squeeze us into the corner. It was a squeeze but well worth it!

We were on the first room floor (second floor for you North Americans). They have a grammophone playing music and the staff is dressed in, I want to say 40s costume, but really I have no idea. It's some kind of period dress. But not over the top, it's more something you might see your grandma wear in old photos. Really lovely and stylish.

But what I loved best was their china. It's all mismatched. 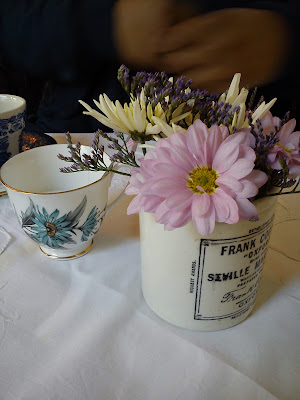 Exhibit A: the 'vase'. And aren't those flowers lovely!?!? 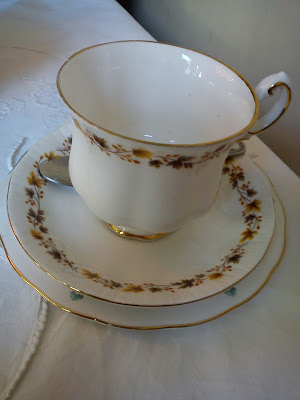 Exhibit B: the tea cup (you cannot see, but the plate underneath has a different design). 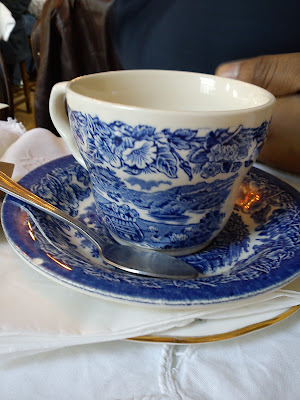 Exhibit C: I love this cup. My grandma used to have a very similar set. Reminds me of being a kid. Aw. 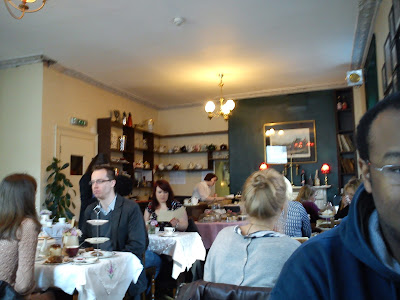 The rooms. Doesn't look like much here, but they were lovely. Mobile phone is not the best camera option. 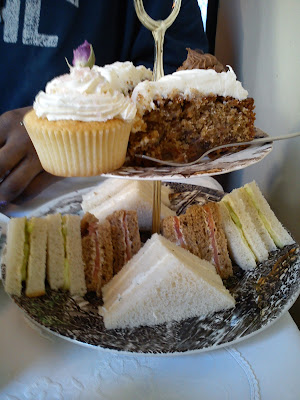 The food! We could pick our slice of cake and cupcake (I had carrot cake and vanilla & lavender cupcake. Nom nom nom.) 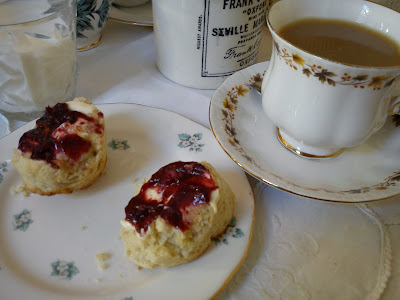 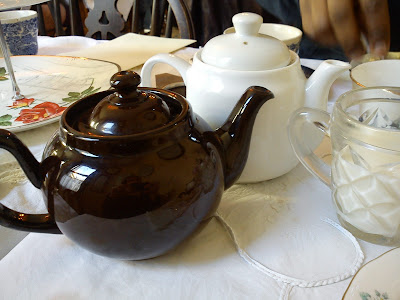 Even our tea pots were not a match.

Overall I loved the place. We might be back. Though I love exploring. Already booked a table for this Saturday at a tiny Chinese tea house. Yay, very exiting for weekend exploration!
Posted by Judith at 07:46 0 comments 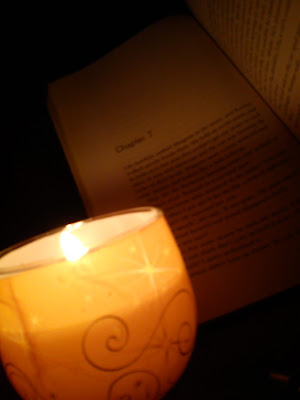 This is a lovely picture from Tuesday evening. We had some emergency building works in our area and when I came home from work water, phone and electricity was not working (man, never been so glad in my life that I went to pee before leaving work [tmi? apologies]).

Bf was staying out for drinks, though I instructed him not to drink too much as availability of water was uncertain. No information when anything would go back on was available as our company kept stressing it was EMERGENCY work. Since 9am. I got home at 7pm. Really, still no idea?

Ah well. After realising that I didn't have any bottled water (or drink of any kind) or candles in the house I ran down to our little convenient store. They had almost run out of candles, so I had to buy the smelly ones. Sorry, scented ones. By the time I got back it was already getting pretty dark. Never realised how quiet and boring it can be without electricity. I did read, but it was just soooo dark and my eyes started hurting after a bit. What a shame, could have been such a nice romantic evening with the bf. Instead I went hungry for a few hours. Power came back at 10. I made dinner overate because I was starving and then couldn't sleep at night because of it. Oh what a lovely day. Ah well, let's hope for no more emergency works. But if they come, we now got water and candles. Boy are we prepared!
Posted by Judith at 07:01 0 comments

It's about spring time

I couldn't put up with the winter colours any more so switched to a brighter colour set. The weather is a bit up and down at the moment, but clearly heading in the right direction. We had some gorgeous days last week and it can only get better. I already started looking for a new pair of sandals and am waiting for my new glasses and sunglasses to arrive. Spent a fortune on them, but I need to see. And it's the first time in years that I will be going to wear sunglasses. I never bothered to get subscriptions on them before so couldn't wear any unless I wanted to be blind.

The weekend was really nice. The bf went a bit crazy on gadget shopping. He wanted to bring them home safely so we took a speedy taxi home. Only to find that he forgot to get a receipt. After a bit of a panic moment we hoped back on the bus and went back to the Apple store. But alas, they are great people and just printed one out again. I must say, their customer service is pretty damn good. As it should be considering the amount of money they make you spend there.

And because I was such a good sport and first came with the bf all the way out to East London to pick up a parcel and then do the Apple store trip twice (all in the same day) he bought me some coffee and a croissant. 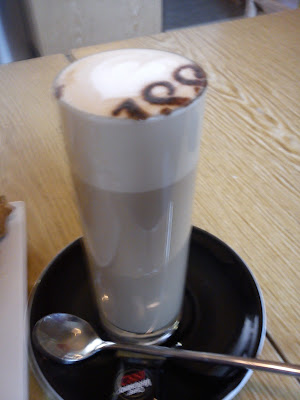 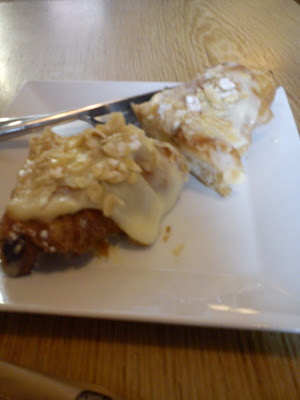 This is an almond croissant covered in custard. I was really good!

We also managed to get a run in on Sunday. Which was great as the sun was out. And to my surprise after that the bf wanted to leave the house AGAIN! That's very unusual for him. So we went out to Oxford Street. I didn't buy anything as I am broke and waiting for the next paycheck. But I started to make lists in my head of what I really really 'need'. Already picked out my new pair of sandals, a nice brown leather bag, and some clothes. Cannot wait to get paid (must not all spend it on the first weekend).

We also picked up some storage shelves from Muji. They have little drawers in them. We organised all our electronics in them. The amount of USB connectors and cables we amassed with our different Kindles, phones, Ipads etc. is unbelievable. They should start to make it optional now. It's just a waste of resources now.

Anyway, hope everyone will have a good week and let's hope the weather stays nice. Been enjoying sitting in the sun at work. Just lifts my mood by like 150%.

I did not finish the meme as intended. When the post about my workplace came up I felt uncomfortable posting anything from work, so just planned on skipping it, but instead ending up not posting for almost three weeks. Big fail on trying to post every week. I will do better from now on. No more memes, just plain posts.

I am actually typing this at work (shame on me even more), but wanted to get that out the way to start anew this week with just a regular post.

A crazy period at work just ended so I feel a bit more able to breathe. Of course this will only be temporary as London Book Fair is fast approaching. But I am still enjoying the 'quiet' time. Also, my colleague who was on jury duty for three weeks came back, making life a lot easier. That was another reason I didn't post. I was doing two jobs at work. But now I am free again and only have to do mine. Yay!

Anyway, lunch break is over and I need to get back to work. Hope to still have some readers left after being AWOL.
Posted by Judith at 13:32 2 comments